If you were granted permanent resident status in the United States, you have a permanent resident card (green card) and have the privilege of living and working inside the U.S. indefinitely. However, there are some limitations. These important differences affect your rights and responsibilities.

U.S. citizenship is forever. It provides increased security and protections from misfortune. While there are certainly patriotic reasons for naturalizing as a U.S. citizen, there are also some significant advantages.

Few of us expect to be arrested for a crime. But what if you were? The U.S. government can revoke permanent residency. However, U.S. citizenship is good for life. Many crimes can result in deportation of a permanent resident or at least create major (and expensive) problems just to renew a green card. Citizenship cannot be revoked unless there is substantial evidence of a crime against the state.

Only U.S. citizens can vote in federal elections. Most states also restrict the right to vote, in most elections, to U.S. citizens.

Democracy and the right to make your opinion count are some the features that make the United States exceptional. U.S. citizens have the ability to change leadership and affect changes on issues such as healthcare, economic issues and immigration policy.

RECOMMENDED: Family-Based Immigration in the U.S.

Naturalization is associated with improved economic outcomes, such as higher incomes and home ownership. In other words, there’s evidence of financial improvement for permanent residents who choose to become U.S. citizens. The Migration Policy Institute found that naturalized citizens have higher rates of employment and have average incomes between 50 and 70 percent more than noncitizens. Their research also suggested that naturalized citizens weathered the effects of economic crisis more successfully than their noncitizen counterparts.

Travel with a U.S. Passport

Traveling with a U.S. passport will allow you entry into most countries around the world without a hassle. In fact, U.S. passport holders have no visa requirement or free visa access in more than 100 countries through the Visa Waiver Program. Additionally, U.S. citizens in need of emergency assistance while overseas can contact the nearest U.S. embassy or consulate for help.

Travel can be a bit more cumbersome for permanent residents. You’ll may need to obtain a visa to enter certain countries. Generally, you’ll also need to have a valid, unexpired green card to reenter the United States. Losing a green card while traveling abroad can be very expensive and time-consuming to resolve.

As a permanent resident, you enjoy many of the advantages that living in the United States has to offer. By becoming a U.S. citizen, you declare your love for the United States and become culturally ingrained in American society.

It’s also not necessary to renounce your citizenship with another country. In other words, the United States does not force you to abandon your current nationality. U.S. law does not require a person to choose one nationality or another.

RECOMMENDED: Dual Citizenship in the U.S.

Perhaps you’re already a permanent resident, and it’s almost time to renew your green card. You definitely don’t want to pay the renewal fee again, but you’re not sure if you’re ready to become a U.S. citizen.

USCIS has a fee either way. You can pay to renew your green card, but you’ll have to do it again in another 10 years (or sooner if you lose your card). On the other hand, you can pay for naturalization and gain the rights of U.S. citizenship. Citizenship is good for a lifetime, and you won’t ever have to pay another USCIS fee again!

Applying for Citizenship is Easier Than You Think

There are major differences when comparing permanent residence vs citizenship. Maybe you’re satisfied living as a permanent resident and concerned about the requirements to become a U.S. citizen. You know there are benefits. But are they worth it? And what about the complicated immigration forms — will an immigration attorney be necessary?

Whether you want to continue renewing your green card or apply to become a U.S. citizen, a few things are increasingly important as we’ve seen immigration policies change during this pandemic:

Our software is designed by immigration attorneys to ensure accuracy, alerts you of any problems or missing information, and shows you samples so you can submit the strongest possible case.

We are so sure that our software is the best possible way to complete your USCIS application that we have a Satisfaction and an Approval Guarantee. If USCIS denies your application, you get your USCIS fees AND our service fee back.

Take the guesswork out of your immigration application and submit your forms through CitizenPath. Start preparing your application today and don’t pay until you’re good to go. 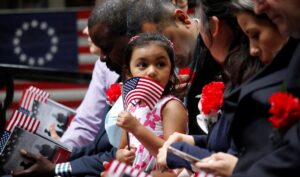 One of the common reasons permanent residents don’t apply for U.S. citizenship – cost. It presently costs $725 to file Continue reading →

As the name suggests, permanent resident status is generally constant. It’s granted to people who intend to live in the Continue reading →