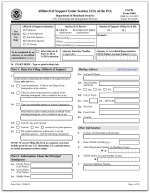 Form I-864, Affidavit of Support, is required for most family-based immigrants and some employment-based intending immigrants to show that they have adequate means of financial support and are not likely to become a public charge. The law does not require other categories like asylum/refugee, special immigrants, or diversity visas to submit the Form I-864.

It’s a contract between a sponsor and the U.S. government. The sponsor promises to support the intending immigrant if he or she is unable to do so on their own.

Eligibility to Be a Sponsor

A sponsor completes Form I-864, Affidavit of Support, on behalf of the intending immigrant. Generally, the sponsor must:

Mistakes on your Form I-864 Affidavit of Support can cause costly delays or a denial. Prepare your I-864 correctly and affordably with CitizenPath. The attorney-reviewed software guides you through the affidavit and provides help to answer questions like this one. And personalized filing instructions help you to submit the affidavit today knowing that you did everything right! No credit card or signup required to try it. Get started now >>

Who Prepares Form I-864 Affidavit of Support

At the time of applying for a green card, the following immigrants are required by law to submit Form I-864 completed by the sponsor:

As mentioned, most all family-based (and even some employment-based) immigrants must have an I-864 sponsor. There are some exemptions for certain people in these categories. The following types of intending immigrants do not need to file Form I-864:

However, if you do qualify for one of the exemptions above, it’s necessary to communicate to the U.S. government by submitting Form I-864W, Intending Immigrant’s Affidavit of Support Exemption, instead of Form I-864.