In his first 100 days, President Biden rolled out numerous executive actions and legal measures related to immigration. Some of these changes affect the way various agencies like U.S. Citizenship and Immigration Services (USCIS) process applications and petitions. Together, there is solid optimism that USCIS processing times will improve in the next few months.

Over the prior administration, processing times and denial rates exploded according to USCIS reporting. In fiscal year 2013, the average denial rate was just over 7 percent. Denials climbed to almost 12 percent in fiscal year 2020. Meanwhile, the backlog of pending cases grew by over 100 percent during the same period. What’s more, the agency threatened massive layoffs as costs outpaced fees collected.

President Biden’s executive order, Restoring Faith in Our Legal Immigration Systems and Strengthening Integration and Inclusion Efforts for New Americans, directs the secretary of homeland security to identify barriers that impede access to immigration benefits and fair, efficient adjudications of these benefits.

Let’s take a look at five factors that are improving USCIS processing times for immigration benefits.

This week, USCIS issued policy guidance instructing its officers to give deference to prior determinations when adjudicating extension requests.

Prior to the Trump administration, there was long-standing guidance for USCIS officers to defer to prior determinations of eligibility when adjudicating extensions requests involving the same parties. In simple terms, that means USCIS should quickly process a green card renewal unless significant, obvious facts come to light that would have them review the case in more detail. Likewise, a DACA renewal application should generally be approved unless there’s changing or new factors suggesting the applicant is not eligible.

In 2017, the Trump administration rescinded this guidance. The new policy instructed USCIS officers to dig deeper into simple renewal cases. They were looking for reasons to deny even when there were no indicators of a problem. This cost the agency more time and money. Consequently, it also translated into much longer processing times. President Biden’s action allows USCIS to correct this disastrous policy.

Under the reinstated deference policy, USCIS officers should now defer to prior approvals for immigration benefits involving the same parties and facts.

In 2019, the agency began rejecting certain forms that included any type of blank space. Reports were rampant of forms being rejected on the basis of blank space for portions of applications that were not relevant to the case. This policy created a senseless stream of rejection letters to applicants and further contributed to increased USCIS processing times.

USCIS has reverted back to the rejection criteria that existed previously. That means they should not reject forms when the answer is non-essential. However, applicants should be aware that they can continue to receive a rejection if they:

These omissions and oversights will also significantly delay a case. If you’re preparing your form on CitizenPath, our software will confirm that you answer all essential questions. In addition to your prepared form, CitizenPath provides you with a set of personalized filing instructions that provide detailed directions on supporting documents, how to organize your application, and where to mail it. See how it works.

Under President Trump’s direction, the long-standing public charge rule was modified to make it harder for low-income people to obtain green cards. It essentially created a wealth test for most immigrants to become a permanent resident. But let’s face it, the more stringent public charge rule made it difficult for most immigrants to apply. It added a very long and invasive form (Form I-944, Declaration of Self Sufficiency). The policy also lengthened USCIS processing times to adjudicate a green card application.

Biden rescinded the Trump-era public charge rule in March. This removed the requirement to submit Form I-944 and eliminated many of the reasons to deny an application based on public charge. USCIS has reverted to the public charge rule that was previously in place. Thus, almost all family-based green card applicants are still required to have a sponsor.

CitizenPath helps applicants with all forms related to a family-based green card application. Sponsors can use our easy, online service to prepare Form I-864, Affidavit of Support, to remove the public charge ground of inadmissibility.

Combined with the ban on nonimmigrant visas (Proclamation 10052), the immigrant visa ban greatly reduced visa issuance for foreign nationals from around the world. According to estimates from the Trump administration, the entry bans may have prevented approximately 525,000 foreign nationals from lawfully entering the United States. That caused the separation of thousands of families, prevented businesses from hiring essential employees, and disrupted the economy.

Let’s face it. The COVID-19 pandemic was a major contributing factor for worsening USCIS processing times over the last year. As the pandemic struck, USCIS closed all in-person appointments such as biometrics, interviews, and oath ceremonies. That halted many cases. The agency continued to accept new applications and petitions but had a limited ability to process and adjudicate. The backlog grew even more.

Likewise, most U.S. embassy and consulate offices closed their visa services and operated with extremely limited capacity. Consequently, applicants were stuck waiting to start or continue the immigration process.

President Trump’s leadership on vaccine development and President Biden’s implementation of the vaccination process have been excellent. It’s allowing the United States to return to normalcy just a little quicker than most parts of the world.

USCIS Application Support Centers are operating again with some limitations. The State Department is resuming routine visa services on a post-by-post basis. Applicants should check the website of their nearest U.S. embassy or consulate for updates on what visa services are currently available. As such, we expect to see continued improvements in USCIS processing times this year.

You can continue to prepare your immigration forms from the comfort of your home. CitizenPath provides affordable, step-by-step guidance through USCIS immigration applications and petitions. It’s designed by real attorneys, and there’s even a money-back guarantee USCIS will approve the forms. So, you can have confidence everything is correct. Learn more >> 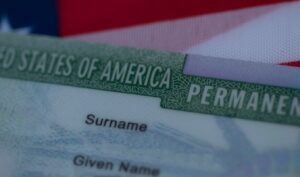 For immigrants arriving to the United States, the American tax system can be a very new and confusing concept. In fact, the U.S. tax system… END_OF_DOCUMENT_TOKEN_TO_BE_REPLACED

FORM I-90
Easy to prepare and guaranteed USCIS approval