As a U.S. armed forces service member, you sometimes find love in the far corners of the world. There are established paths for you to help your spouse or fiancé come to the United States. A long deployment may even mean that you’ve started a family before you’ve even had a chance to return to the U.S. But even if you’ve found that special person inside the U.S., you can help your foreign citizen spouse obtain a green card.

A U.S. citizen or lawful permanent resident, is able to petition a spouse to come to the United States (or stay when already present) and obtain permanent residence (green card). Some of the basic requirements for the couple include the following:

The immigration process for the foreign fiancés of military service members is similar but not the focus of this article. To petition a fiancé to come to the United States for marriage and a green card, review our overview of the K-1 visa process.

Even undocumented spouses of U.S. service members can typically qualify for a green card. The spouse of a U.S. citizen may apply for a green card after a visa overstay provided they continue to be inside the country. It’s generally straight forward and doesn’t require special attention from a lawyer. Departing the U.S. after the visa overstay can trigger bars to reentry that make it more complicated to reenter. Also, the process is more complicated for spouses of permanent resident service members to obtain a green card after a visa overstay. Contact an immigration attorney to a solution that best fits your situation.

The application process largely depends on the physical location of the military spouse. Most people apply for a green card at embassies abroad, but certain individuals may apply inside the United States.

Spouses of military personnel who are residing outside the United States will generally use consular processing to apply for a green card. In other words, they will apply and interview through a U.S. embassy or consulate abroad. The process begins with the U.S. citizen or permanent resident service member filing an immigrant visa petition package that includes these forms:

Once USCIS approves the visa petition, they transfer the case to the National Visa Center. The NVC will collect additional documents and invite the foreign national spouse to apply for the immigrant visa (green card).

RECOMMENDED: What Happens After I-130 Approval

Certain military spouses who are already inside the United States won’t have to leave in order to get a green card. This process, known as adjustment of status, is generally available only to spouses physically present in the U.S. who have an immigrant visa immediately available to them.

There is an unlimited amount of immigrant visas for the immediate relatives of U.S. citizens. Thus, the spouses of U.S. citizens always have an immigrant visa available to them. This isn’t the case for all types of immigration relationships. Congress puts statutory limits on the number of visas available. This can often create a wait time. At the time of writing this, there is no wait for the spouses of lawful permanent residents, meaning that spouses of permanent resident service members may typically also adjust status.

To apply for a green card through adjustment of status, the foreign national spouse submits an application package that includes:

Regardless of the path taken, consular process or adjustment of status, the application package must contain several supporting documents. The supporting documents can vary significantly based on the type of relationship and answers in each form. CitizenPath provides an affordable way to make this process easier. Attorneys designed the online immigration service to simplify the preparation of these government forms. In addition to your prepared forms, you get personalized filing instructions based on your answers. You’ll know exactly which documents to submit, and you’ll get CitizenPath’s guarantee that USCIS will approve your application.

The processing time for these forms can vary depending on the USCIS case load, State Department backlogs, and other factors. Generally, a couple should expect the process to take 10 to 18 months to get a green card. Well-prepared application packages have the best chance of quick processing. Missing information and small mistakes can cause significant delays due to the agencies’ need to follow up and request additional information. For a closer look at what happens after filing, visit the Form I-130 processing time for consular processing and the Form I-485 processing time for adjustment of status cases.

Couples that are engaged to be married and plan to marry inside the United States use a different process. Instead, the U.S. citizen obtains a K-1 visa for the fiancé by filing Form I-129F, Petition for Alien Fiancé. Within 90 days of arriving in the United States, the couple must get married and the alien fiancé must adjust status to a permanent resident by filing the adjustment of status packet.

USCIS does provide some dedicated support for military families with immigration needs. Current members of the military and their families, as well as veterans may use a toll-free military help line, 877-CIS-4MIL (877-247-4645) and e-mail address at [email protected]. USCIS representatives are available to answer calls Monday through Friday from 8 a.m. to 4 p.m. Central, excluding federal holidays.

CitizenPath provides simple, affordable, step-by-step guidance through USCIS immigration applications. What’s more, there are discounts available to military families. Individuals, attorneys and non-profits use the service on desktop or mobile device to prepare immigration forms accurately, avoiding costly delays. CitizenPath allows users to try the service for free and provides a 100% money-back guarantee that USCIS will approve the application or petition. We provide support for the Petition for Alien Relative (Form I-130), Adjustment of Status Application (Form I-485), Petition to Remove Conditions of Residence (Form I-751), and several other USCIS forms. 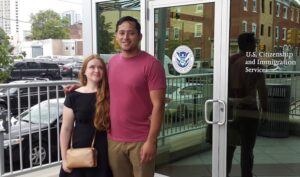 What to Expect at your Adjustment of Status Interview at USCIS First of all, don’t END_OF_DOCUMENT_TOKEN_TO_BE_REPLACED

The questions vary from, “Can I apply for a green card after a visa overstay?” END_OF_DOCUMENT_TOKEN_TO_BE_REPLACED

Getting married can be an overwhelming process, but navigating the U.S. immigration system is no END_OF_DOCUMENT_TOKEN_TO_BE_REPLACED