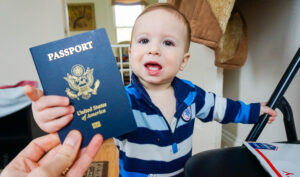 A Consular Report of Birth Abroad (CRBA) is an official document certifying acquisition of American citizenship for a child born outside of the United States.

A Consular Report of Birth Abroad of a U.S. citizen is only issued to a child who acquired U.S. citizenship at birth and who is generally under the age of 18 at the time of the application.

Procedure for Documenting a Birth Abroad

Not Eligible for a Consular Report of Birth Abroad

Individuals born in Puerto Rico, U.S. Virgin Islands, American Samoa, Guam, Swains Island, The Panama Canal Zone (before October 1, 1979), The Commonwealth of the Northern Mariana Islands (after January 8, 1978, 8PM EST), and The Philippines (before July 4, 1946) may establish acquisition of U.S. citizenship or non-citizen nationality, based upon the applicable agreement or statute, by producing their birth certificate issued from the local Vital Records Office along with any other evidence required to establish acquisition.

For persons born in American Samoa and Swains Island, the easiest way to obtain American citizenship is to establish residence in the United States and file Form N-400, Application for Naturalization.

Obtaining Proof of U.S. Citizenship When Over 18

RECOMMENDED: Acquisition of Citizenship for Children Born Outside the United States

The U.S. State Department stopped producing the Certificate of Report of Birth (DS-1350) in 2010. This was a similar document that remains valid. However, any replacements are now issued as Form FS-240. Only certain individuals may request a replacement FS-240:

To request a Consular Report of Birth Abroad form (FS-240), you must submit the following items:

Mail the request, copy of the photo ID, and payment to:

The U.S. State Department generally takes 4 to 8 weeks time to process your Consular Report of Birth Aboard. If you don’t provide all the items listed above, your request for the CRBA will be delayed.

Note to Reader: This post was originally published on January 5, 2016, and has been modified with improvements.