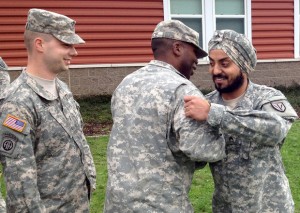 Although it isn’t a military secret per se, MAVNI is a small and very exclusive program that benefits immigrants and the U.S. military. Military Accessions Vital to the National Interest (MAVNI) is a special recruiting program that has been available to certain immigrants interested in joining the U.S. military. Generally, immigrants must be permanent residents to join the military (see Military Enlistment Requirements); once enlisted these green card soldiers can take advantage of expedited citizenship. However, MAVNI allows certain non-citizens in the United States to join the military and thereby gain eligibility for U.S. citizenship without first having to go through the lengthy process of obtaining a green card.

How to Qualify for MAVNI

MAVNI Open to DACA Recipients
Individuals who have been granted deferred action by the Department of Homeland Security pursuant to the Deferred Action for Childhood Arrivals (DACA) process are eligible for consideration. Generally the program requirements stipulate a legal immigration status. However, the military service may on a case by case basis waive the requirement that the foreign national be in a status described above.

What’s more, this special program is restricted to healthcare professionals or experts in certain key languages with associated cultural backgrounds.

Applicants in the healthcare professional recruit category must:

Applicants in the language recruit category must:

Military Accessions Vital to the National Interest began in 2008 as a pilot program and has had an uncertain future ever since. Although over 10,000 troops who have signed up to serve through MAVNI since 2008, it has been at the center of political haggling.

The program was suspended 2017, and in October the Pentagon announced new, more strenuous security clearance standards. For now, the military is focused on catching up on the current group of recruits that has been stuck in limbo. MANVI recruits are unable to enter basic training until the security clearance review is complete and approved.

For now, the program is unavailable for new recruits. Some top brass, including Defense Secretary Jim Mattis, have gone on record to support the program. According to an anonymous military official, the Pentagon will review the MAVNI program once all of the existing recruits are through the system.

How to Apply for MAVNI

At this time, the U.S. military has stopped accepting applications for the MAVNI program.

When the MAVNI program was accepting applications, you would have to share your passport, I-94 card, I-797 Notice of Action, your employment authorization document, or other government issued documents proving your legal presence in the United States. Applicants would have to go through background checks, security screenings, and meet all the other general requirements of becoming a U.S. citizen. If you are interested, contact your local U.S. military recruiting office. They may have information when the program becomes available once again.

For immigrants with an interest in military service and U.S. citizenship, the MAVNI program may provide a path to citizenship that many non-permanent residents would not normally be afforded. What’s more, they fill a necessary gap in military recruitment and provide services that otherwise would be difficult and costly to train.

CitizenPath provides simple, affordable, step-by-step guidance through USCIS immigration applications. Individuals, attorneys and non-profits use the service on desktop or mobile device to prepare immigration forms accurately, avoiding costly delays. CitizenPath allows users to try the service for free and provides a 100% money-back guarantee that USCIS will approve the application or petition. We provide support for the Adjustment of Status Application (Form I-485), Petition to Help a Relative Obtain a Green Card (Form I-130), and several other USCIS forms. 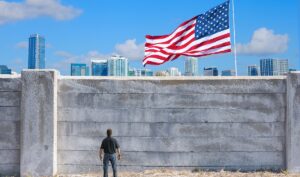 It seems straight forward. Anyone who has served in the United States military is also worthy of U.S. citizenship. But it’s not always that easy.… END_OF_DOCUMENT_TOKEN_TO_BE_REPLACED