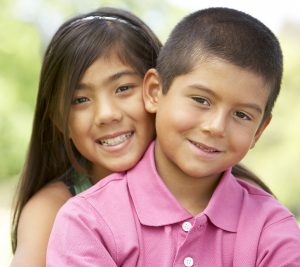 U.S. citizens and lawful permanent residents can both help their children obtain permanent resident status (green card) in the United States. The process starts by filing Form I-130, Petition for Alien Relative.

However, before beginning the process, the petitioner should understand the basics of helping a child immigrate through the family-based immigration process. The child’s age, type of relationship and several other factors play a role in determining eligibility.

Who Qualifies as a Child?

Immigration law defines a child as an individual who is under the age of 21. On the other hand, any person age 21 or older is considered a son or daughter to the parent. These are important distinctions as they affect eligibility and priority in the family-based process. In addition to biological relationships, parents may be able to petition step children and adopted children. Children born out of wedlock may also be eligible. Specific rules apply to each, and it can get complicated.

A U.S. citizen is able to file the I-130 for virtually any child. The child can be any age, married or unmarried. However, these factors may affect wait times. A U.S. citizen can file Form I-130 for:

Unmarried children (under 21 years of age) of a U.S. citizen qualify as immediate relatives. This is significant because immigration law does not limit the number of immediate relative visas (green cards) issued each year. The process is relatively quick. Married children, as well as sons and daughters (21 or older), qualify in family preference categories. They are still eligible for a green card, but it’s likely they’ll have to wait much longer.

Each immediate relative beneficiary must have his or her own I-130 petition. So a U.S. citizen who files Form I-130 for a spouse must also file a separate I-130 petition for any children that intend to immigrate with the parent.

Mistakes on your I-130 can cause costly delays or a denial.

Prepare your I-130 petition correctly and affordably with CitizenPath. The attorney-reviewed software guides you through the petition and provides help to answer questions like this one. And personalized filing instructions help you to file your petition today knowing that you did everything right! No credit card or signup required to get started. Try it before you buy it >>

On the other hand, derivative beneficiaries do not require separate petitions. For example, a U.S. citizen petitions his foreign citizen adult son. The petitioner includes the son’s wife and child on the same I-130 as derivative beneficiaries. When USCIS approves the I-130 petition and a visa is available for the principal beneficiary (the son), the wife and children can apply for green cards at the same time.

If an unmarried son or daughter marries before the permanent resident becomes a U.S. citizen, USCIS will automatically revoke any pending Form I-130 petition filed for that son or daughter.

Adoptive relationships get much more complicated. Generally, a petitioner can only file Form I-130 on behalf of an adopted child if the child was adopted prior to age 16. However, there are exceptions to this rule. What’s more, most adoption-based immigration occurs through the orphan intercountry or Hague processes. These are complicated and specialized areas of immigration law. Therefore, we recommend that you seek advice about your specific situation from an experienced immigration attorney.

Documents to Submit with Form I-130

The list of documents that you must submit to USCIS varies significantly based on your citizenship, the child’s age, and type of relationship (biological, step, adoptive). Read the USCIS instructions, consult with an attorney, or consider using CitizenPath. CitizenPath’s I-130 preparation software can help you prepare the I-130 petition accurately and provide a detailed list of supporting documents to submit based on your answers in the petition.