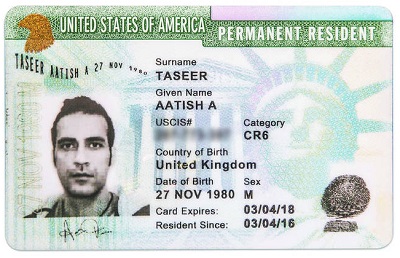 If your marriage was less than two years old on the day you were granted permanent residence, USCIS issues a conditional green card. You are given conditional resident status on the day you are lawfully admitted to the United States on an immigrant visa or adjustment of your status to permanent residence. Generally, this will be indicated with a class of admission that begins with “CR.” In the sample green card displayed above, you’ll see the “CR6” for the category.

Your status is conditional, because you must prove that you did not get married to evade the immigration laws of the United States. The conditional green card is like a probation period for two years during which the couple builds a record of their married relationship together. At the end of that period the couple files Form I-751, Petition to Remove Conditions on Residence, and other supporting documents as evidence of a bona fide marriage.

Did you know minor mistakes on your Form I-751 can cause costly delays and rejections? Prepare your I-751 petition quickly and correctly with CitizenPath. The attorney-reviewed software guides you through the petition and provides help to answer questions like this one. And personalized filing instructions help you to file your petition today knowing that you did everything right! No credit card or signup required to try it. Get started now >>

You must file Form I-829, Petition by Entrepreneur to Remove Conditions, to remove the conditions on your permanent resident status. Form I-829 must be filed within 90 days before the second anniversary of your admission to the United States as a conditional resident.

If you do not file Form I-751 as required, you will automatically lose your conditional permanent resident status as of the second anniversary of the date you were granted conditional status. As a result, you will become removable from the United States.

The conditional two-year period is in place to help prevent green card fraud. Therefore, conditional green card holders should take the filing process very seriously as it is more than just filing a form.