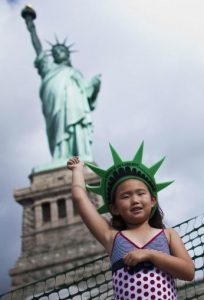 When preparing an Adjustment of Status application it’s also necessary to list your children on Form I-485, Application to Register Permanent Residence or Adjust Status.

But each child will need to have a separate I-485 application if they are immigrating with you. Even if the child was listed as a derivative applicant on an approved visa petition (such as Form I-130 or Form I-140), each applicant for permanent residence (green card) must file a separate Form I-485, Application to Adjust Status.

U.S. Citizenship and Immigration Services (USCIS) has a specific definition for children. Therefore, it’s important that you understand the who qualifies as a child for the purposes of adjusting status.

Children on Your Form I-485 Application

When preparing Form I-485, Application to Adjust Status, the parent will list all of his or her sons and daughters in Part 6, regardless of whether they are:

You will also be asked if “this child is applying with you.” However, answering “Yes” will not grant your child immigration benefits. Each child must be eligible and file a separate application.

Who is Considered to be a “Child”

For the purposes of the immigration process, USCIS considers a child to be an unmarried son or daughter under the age of 21 that is also any of the following:

RECOMMENDED: Aging Out and How the Child Status Protection Act May Help

Like an adult, a child can generally adjust status if he or she is physically present in the United States through a lawful entry and a visa is immediately available.

The child of a U.S. citizen may concurrently file a Form I-130, Petition for Alien Relative, with Form I-485 because a visa is always available to immediate relatives. The child of a lawful permanent resident may have to wait until the Form I-130 is approved and current. Family-preference categories generally have a wait time due to a limited number of visas each year. Likewise, children who are derivative applicants will require that the principal’s petition is approved and current.

For more information, visit our section on family-based immigration or green card through adjustment of status.

If the beneficiary is not physically present in the United States, he or she must apply for a green card through consular processing.