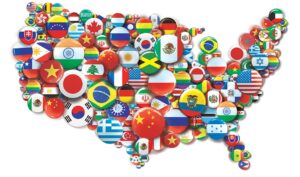 Our great nation was created by people with families that originally came from other countries. In June, we celebrate the strength that this diversity created.

Immigrant Heritage Month is powered by FWD.us, a bipartisan political organization that fights for immigration and criminal justice system rights. The campaign is a collaboration of community organizations, elected officials, corporations, artists, and thought leaders to gather and share inspirational stories of American immigrants.

“One of the remarkable things about America is that nearly all of our families originally came from someplace else. We’re a nation of immigrants. It is a source of our strength and something we can all take pride in.”
— Barack Obama

Columnist George F. Will writes that immigration is an “entrepreneurial act.” Immigrants are risk takers that left their native cultures in pursuit of new opportunity in America. This willingness to take chances and challenge the status quo has created countless businesses in the United States.

The Partnership for a New American Economy uncovered some remarkable statistics in a recent study that researched how immigration has affected the U.S. economy:

“It says something about our country that people around the world are willing to leave their homes and leave their families and risk everything to come to America. Their talent and hard work and love of freedom have helped make America the leader of the world. And our generation will ensure that America remains a beacon of liberty and the most hope fill society this world has ever known.”
— George W. Bush

Immigration is a Job Creator

Immigrants have had an enormous impact on U.S. jobs and the gross domestic product (GDP) – They are job creators. In example after example, the nation’s economic growth is being led by immigrant-owned businesses.

Immigrants don’t simply fuel business growth. They are proven leaders in the area of STEM: science, technology, engineering and math.

“More than any other nation on Earth, America has constantly drawn strength and spirit from wave after wave of immigrants. In each generation, they have proved to be the most restless, the most adventurous, the most innovative, the most industrious of people. Bearing different memories, honoring different heritages, they have strengthened our economy, enriched our culture, renewed our promise of freedom and opportunity for all…”
— Bill Clinton

The Immigrant Heritage Month campaign encourages both recent immigrants and native-born Americans to share their immigrant stories. Sharing your story is easy. Simply upload a photo, briefly tell your story, tag with the hashtag #IHM2020 or #CelebrateImmigrants and post on Twitter, Facebook or Instagram. Or you can see events on the IAmAnImmigrant.com website.