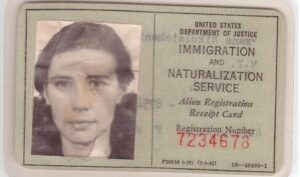 The green card, which only recently became green again, has a history with a variety of names and colors. It’s transformation over time into a critical piece of photo identification reflects the scarcity of residency in the United States. The security features are proof that numerous counterfeiters will stop at nothing to duplicate it. In fact, the history of the green card is very colorful.

U.S. Citizenship and Immigration Services (USCIS) officially refers to the green card as the Permanent Resident Card. However, it has also been known over time as a Resident Alien Card or Alien Registration Receipt Card. Internally, USCIS refers to it as Form I-551. You’ll see typed in small print in the corner of your newer cards.

It wasn’t until 1940 that foreign nationals were even required to register within the United States. The Alien Registration Act of 1940 required that all aliens (non-U.S. citizens) within the U.S. register with the federal government at post offices. The registration forms were forwarded to the Immigration and Naturalization Service (INS) for processing, and a receipt card (Form AR-3) was mailed to each registrant as proof of compliance with the law. The law did not discriminate between legal and illegal alien residents. All aliens had to register, and all received AR-3 documents.

The first green card emerged soon after World War II. Congress enacted the Alien Registration Act of 1940, which required foreign-born persons 14 years of age and older to report to a U.S. post office to be fingerprinted and register their presence in the United States. As immigrants began streaming through U.S. borders, alien registration ceased to take place at post offices and became part of regular immigration procedures at ports of entry and immigration offices. Immigrants with no legal basis to remain in the United States were required to leave or were removed. Those with a valid claim to permanent residency received documentation to prove their status. INS began to issue different documents based on the alien’s admission status to replace the receipt cards. For example, visitors received an I-94c, temporary foreign laborers received an I-100a, and lawful permanent residents (LPRs) received an I-151. The pale green colored Form I-151 became coveted proof that the holder was entitled to live and work indefinitely in the United States

The Internal Security Act of 1950 increased the value of Form I-151, Alien Registration Receipt Card. Effective April 17, 1951, aliens holding AR-3 cards could replace them with a new Form I-151. However, only those with legal status could replace their AR-3. What’s more, aliens who could not prove their legal admission into the United States were subject to prosecution for violating U.S. immigration laws.

As a result, the Form I-151 card represented security to its holder. It indicated the right to live and work in the United States permanently and instantly communicated that right to law enforcement officials. Because of the card’s cumbersome official name — Alien Registration Receipt Card — immigrants, attorneys, and INS workers came to refer to it by its color, calling it the “green card.”

As the desire to immigrate to the United States grew, so did the value of the green card. By the 1950s, INS was burdened with the problem of counterfeit green cards. To combat document fraud, the INS issued 17 different re-designs of the card between 1952 and 1977. Over the entire history of the green card, counterfeit cards have been a problem.

A more counterfeit-resistant version of the green card was developed in 1977. The newer, machine-verifiable green card was produced only in a Texas facility to improve uniformity and quality. The formerly paper cards were now made durable like credit cards and driver licenses. A fingerprint, signature and A-number were added as additional identification measures.

Immigration and Naturalization Service renamed it with its current form number, Form I-551, and adopted a new name, “Resident Alien Card.” Cards issued between 1977 and August 1989 do not have document numbers or expiration dates and are valid indefinitely.

However, employers found it difficult to verify identity because of the various versions of the green card. So INS once again issued a new card version in August 1989. These peach-colored cards contain expiration dates, but do not have document numbers and have since expired.

During the history of the green card, fraud has always been a problem. As quickly as INS worked to counter fraud, counterfeiters caught up. Thus, a more secure card was developed and issued in December 1997. The revised card bared a new name, “Permanent Resident Card,” but retained the Form I-551 number. A unique document number (also known as a card number) was also added to the card.

In May 2004, the design was modified slightly with the Department of Homeland Security seal and a detailed hologram on the front of the card. A large number of permanent residents continue to carry this version of the card. The last cards will expire in 2020.

The card regained its green coloring in May 2010 when USCIS released one of the most fraud-resistant versions to date. Since the last of these cards won’t expire until 2027, many of this edition continue to be in the hands of permanent residents. The cards feature security technologies such as holographic images, laser engraved fingerprints, high-resolution micro-images, and radio frequency identification (RFID).

According to USCIS, “state-of-the-art technology incorporated into the new card prevents counterfeiting, obstructs tampering, and facilitates quick and accurate authentication.”

The enhancements of this edition reflect the importance of maintaining a valid, unexpired copy of a green card. Validating identity at airports and with employers through the I-9 verification process makes the card a vital piece of identify for U.S. permanent residents.

In May 2017, USCIS began issuing a redesigned green card as part of the Next Generation Secure Identification Document Project. In a constant pursuit to prevent fraud, the current edition of the green card uses enhanced graphics and fraud-resistant security features.

USCIS takes a proactive approach, often working with other agencies like U.S. Customs and Border Protection and U.S. Immigration and Customs Enforcement, to enhance document security and deter counterfeiting. The result is the most highly secure and tamper resistant identification in the history of the green card.

Previous editions of the card continue to be valid for I-9 employment verification provided they are not expired.

CitizenPath provides simple, affordable, step-by-step guidance through USCIS immigration applications. Individuals, attorneys and non-profits use the service on desktop or mobile device to prepare immigration forms accurately, avoiding costly delays. CitizenPath allows users to try the service for free and provides a 100% money-back guarantee that USCIS will approve the application or petition. We provide support for the Adjustment of Status Application (Form I-485), Citizenship Application (Form N-400), Green Card Renewal (Form I-90), and several other USCIS forms.

Note to Reader: This post was originally published on February 15, 2015, and has been modified with improvements.