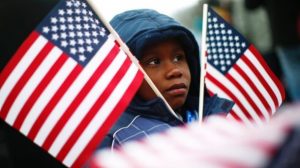 Obtaining U.S. citizenship based on the described circumstances is known as “acquisition of citizenship.” If you believe that you may be a U.S. citizen through acquisition, do not file N-400, Application for Naturalization. Your record of birth abroad, if registered with a U.S. consulate or embassy, is proof of your citizenship. You may also apply for a Certificate of Citizenship by filing Form N-600, Application for Certificate of Citizenship. With either document, you’ll be able to obtain a U.S. passport.

RECOMMENDED: Acquisition of Citizenship for Children Born Outside the United States

Birth to Parent that Naturalized Later

Another possible scenario is that a parent naturalizes after the child is born. You may be a U.S. citizen if your parent became a U.S. citizen through naturalization while you were still a child. Children under 18 years of age automatically acquire U.S. citizenship if the following three conditions have been fulfilled:

The three requirements can occur in any order.