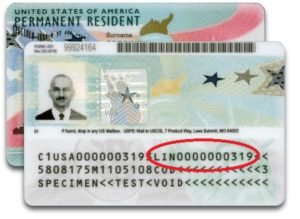 The permanent resident card number generally begins with three letters followed by a series of 10 numbers. Each of these characters has a significance in your case. However, your card number is different than your alien registration number (A-Number) and USCIS number.

How to Find Your Permanent Resident Card Number

Mistakes on your I-90 application can cause costly delays or a denial.

Prepare your I-90 correctly and affordably with CitizenPath. The attorney-reviewed software guides you through the application and provides help to answer questions like this one. And personalized filing instructions help you to file your application today knowing that you did everything right! No credit card or signup required to get started. Try it before you buy it >>

How to Read Your Card Number

Service Center (CSC 17 011 32584)
Every receipt number begins with three letters that represent the service center that received the case. There are several codes for USCIS service centers. They include:

Fiscal Year (CSC 17 011 32584)
The second set of digits represent the fiscal year that the case was received. Government agencies use a fiscal year that is different from the calendar year. It begins on October 1 and ends on September 30. So our example case number was opened between October 2016 and September 2017.