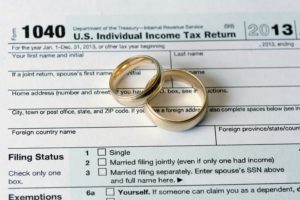 One of the primary documents to demonstrate living in a bona fide marriage is to submit copies of joint income tax returns (or an IRS tax transcript) for each of the relevant years. A tax return that shows you were married and filed jointly with your spouse is an indicator that there was a genuine marriage.

But what if you filed separately? Some couples may have filed “married filing separate.” Although this is not ideal, it isn’t necessarily a problem. It does not prevent you from successfully filing N-400 to become a U.S. citizen.

The choice to file married but separate could have been made because of a tax advantage. Its plausible to file this way if it offered a financial advantage. Obviously, both tax returns should have the same address. Further, you’ll need to provide alternative evidence to demonstrate that you live in marital union. This may include but is not limited to:

On the other hand, if you are married and filed single in an attempt to avoid income taxes, this sets up other problems. If you have failed to file a tax return as required, filed fraudulently or have unpaid income taxes, it’s best to speak with an immigration attorney before filing Form N-400.