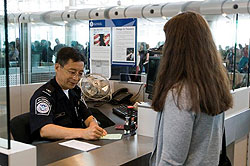 If your absence from the United States has been one year or longer, your green card is no longer valid for reentry. Customs and Border Protection (CBP) officers may not allow you to reenter the U.S. Or, the CBP officer could allow you to enter but also refer you to a judge for deportation proceedings. In fact, under certain circumstances travel abroad could jeopardize your permanent resident status even if your time away has been less than a year. A returning resident visa may be available to some permanent residents with extraordinary situations.

There are a variety of scenarios that could leave you stranded abroad. Here are some potential solutions to your situation.

Permanent residents who lose a green card outside the United States can generally return. But the process will add additional time and expense to the trip. The permanent resident must file Form I-131A, Application for Travel Document (Courier Documentation), at the closest U.S. embassy or consulate. Form I-131A should only be filed if you are returning from overseas travel of:

Temporary Absence More Than One Year

Generally, this problem can be avoided by obtaining a reentry permit before departing. A reentry permit is valid for reentry to the United States for a period of up to two years after departing.

The success of a returning resident visa application is highly dependent on providing evidence that:

For this reason, we recommend that you contact an immigration attorney to evaluate if your situation warrants an SB-1 visa and proving assistance with the application.

Fighting for a returning resident visa can be time-consuming and expensive. In many cases, the most practical approach is to apply for permanent residence again. For family-based immigration cases, a relative will need to start the process by filing Form I-130, Petition for Alien Relative. Speak to an immigration lawyer to determine which course makes the most sense for your situation.